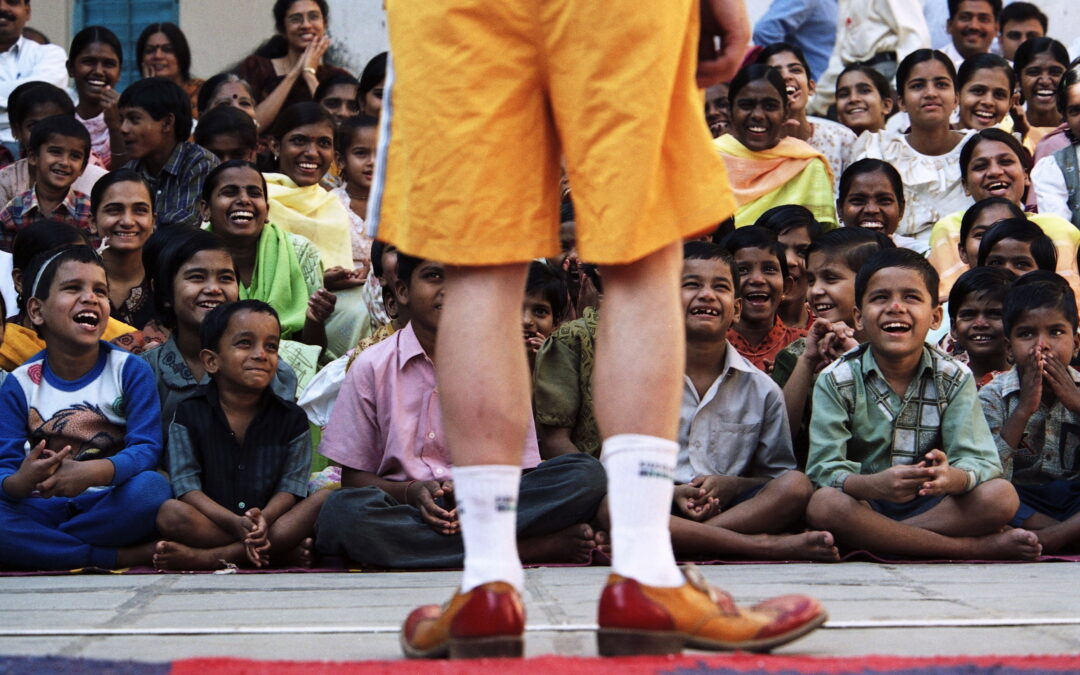 This is the first in a series of guest posts by Naomi Shafer from Clowns Without Borders.

When I was 18, I did a volunteer program to plant trees…in Siberia. For context, Siberia has 20 percent of the earth’s forests, and 60 percent of the boreal forest in the Northern Hemisphere. In other words, lots of trees. (Side note, in 2019 and 2020 forest fires in Krasnoyarsk Siberia burned over 20.9 million hectares of trees, so maybe today a tree-planting project would be useful.)

The project involved walking into the woods to dig up small trees, carrying them to the school property, and planting them…but first we dug up the trees that last year’s volunteers’ had planted. Yep!

After a few days, it seemed pretty clear that the “agriculture project” was a pretext for getting volunteers to pay to spend two weeks at the school.

I had arranged my gap year to study agriculture in Russia and France, providing labor in exchange for room and board. I grew up in Vermont and my previous job experience was as a counselor for theater camp and farming. Milking cows, splitting wood, weeding and driving a tractor were within my existing skill set. I’d already been to Russia multiple times, and I spoke proficient Russian, but was eager to see parts of the country that I hadn’t explored with my family.

The volunteer project, as I remember it, was to spend 2 weeks in a school for the deaf. I don’t know if I thought we were going to be teaching kids or farming. We did neither. In all honesty, I didn’t choose the volunteer project because it was within my skill set (farming and teaching theater). I chose it because I wanted to go to Siberia (and I didn’t want the responsibility of arranging my own travel on the Trans Siberian Railroad).

The cracks in the project started to emerge soon after our arrival. We were, in many ways, sequestered from the students. We ate in a separate room, and all of our activities were on our own. In addition to the tree-planting, we were asked to clear space for a garden. There were only two shovels for the six volunteers, so it was a slow process. By speaking with one of the school administrators, I learned that our labor was not strictly necessary. The school had hired a tractor to come and clear the ground properly after we left.

The experience left me furious. I had wanted to be useful. Instead, it was clear that my contributions were symbolic. Our “work” was scheduled around visits to the Krasnoyark’s main tourist destinations (a hydroelectric dam, a large rock formation, an old monastery). We were neither workers nor tourists, but instead straddled a place in between. The school staff worked extra hard to make us comfortable, but by doing so, we were often isolated from the youth we were supposed to be serving.

I learned a lot, mainly about the power of nonverbal communication. Between my Russian and mime training, I was able to pick up enough Russian Sign Language to carry on conversations with the students before the big bell rang, signalling curfew. Many of them were my age, and so we laughed and joked and rolled our eyes at anyone over 40.

I also learned a lot about the other volunteers (who came from Hungary, Japan, Mexico, Switzerland, and the Netherlands). We had great conversations. I learned about the passion of these adults who wanted to do good in the world. Who wanted to learn about other cultures through service and cultural integration. I also saw their frustration.

I also learned the danger of being critical. I was the youngest in the group, and spoke more Russian than the trip leader. My ability to translate when he couldn’t was as unwelcome as my questions about, “will anyone water these trees that we’re planting?”

I also learned that even though our “agriculture project” was not useful, our presence may have been. Living in a school for the deaf taught me so much about communication and my own assumptions around accessibility. Though the project did not have structured time for cross cultural learning, we (students and volunteers) found ways to share about ourselves, our homes, our cultures.

I saw the care that the teachers had for their students. While the money I spent on the program did not go to an agricultural project, I believe that it was used for the school. I’m saddened if this school felt they had to create a project for the sake of getting international interest – and funds – for daily operations. AND, as someone who now runs an organization, I know how essential those operating funds are.

I don’t know what happened to those 18 trees I planted in Siberia. I have a feeling that a year later, other volunteers dug them up and replaced them. And yet, I wonder, was it a useful experience? It certainly planted a seed in me about the importance of doing work that is wanted.

I now run a small organization, Clowns Without Borders, and every month I have to make hard and essential choices around working with volunteers. We work with professional circus artists and clowns to perform in refugee camps, conflict zones, and communities in crisis. Often, donors will ask if they can perform on a tour in exchange for a large donation. Many people expect that the desire to be useful is the same as being useful.

It’s hard to say no to these donors, AND, it is my job to say no. It is my job to produce the highest level of performance that I possibly can, which is why we only work with performers who are already experienced (and excellent) at performing 2-3 times a day.

It is also my job to make sure that our services are truly wanted by our project partners. I say that we “only go where we’re invited,” because I want to make sure that I’m never imposing myself on another NGO or community. I constantly make sure that my own desire to do good doesn’t get in the way of what a community experiencing a crisis actually needs.

I stay guided by asking the following questions:

Naomi Shafer is a clown and producer. She uses humor, playfulness and physical storytelling to turn power dynamics upside down – see her in action here. As the Executive Director of Clowns Without Borders USA, she produces clown tours in refugee camps, conflict zones and sites of natural disaster. She holds a B.A. from Middlebury College, an M.B.A. from Marlboro College, and a rubber chicken from the San Francisco Circus Center Clown Conservatory. The main photo shows CWB performing in Nepal in 2007, Photo Credit Clowns Without Borders.